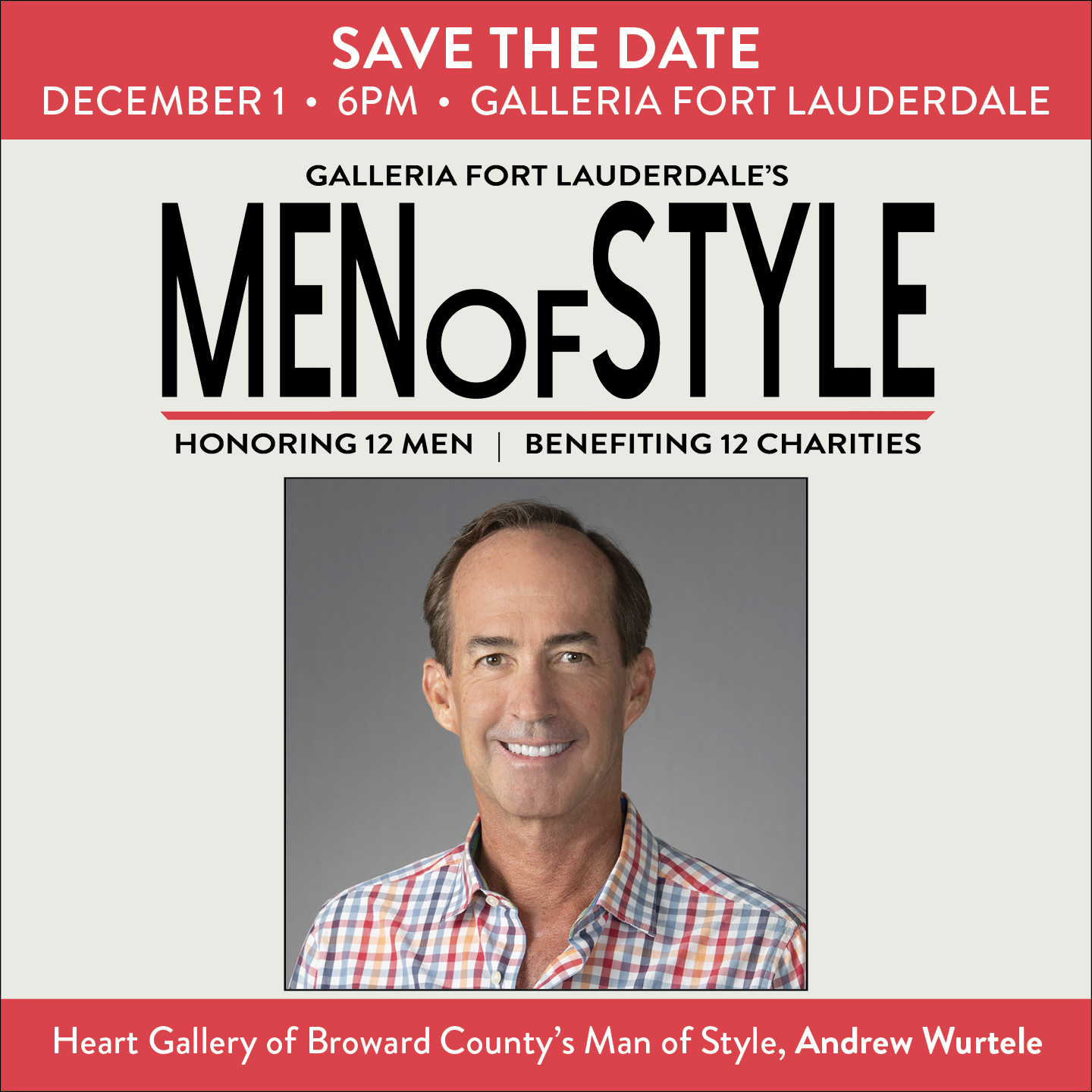 SAVE THE DATE!
HONOREES ANNOUNCED FOR THE  16TH ANNUAL GALLERIA FORT LAUDERDALE’S MEN OF STYLE PRESENTED BY
SIGNATURE GRAND ON DECEMBER 1

FORT LAUDERDALE, Fla. (August 10, 2022) –  Galleria Fort Lauderdale’s Men of Style presented by Signature Grand, the most fashionable social event of the season, is back and ready to rock the runway on Thursday, December 1, from 6 – 9 p.m.! Recognized as one of Broward County’s premier shopping destinations, Galleria Fort Lauderdale has announced the lineup of honorees and its new special guest host, Nicole Perez WPLG Local 10 anchor.

For the past 15 years, the Galleria has proudly hosted this high energy event which showcases a stellar roster of prominent men who are making a positive impact in our community. Last year’s record-breaking event raised over $203,000 for 12 respected local charities that impact the quality of life for those they serve and the community-at-large.

“We’re thrilled to be hosting our fun and fashionable Men of Style for its 16th year which is a testament to and celebration of the achievements of 12 philanthropic men and the charitable nonprofits they serve,” said Melissa Milroy, senior marketing manager at Galleria Fort Lauderdale. “Galleria Fort Lauderdale is a steadfast community partner committed to making a difference year-round. We are grateful to continuing sponsor Signature Grand and our many supporters that make this a most memorable and meaningful event.”

The 12 influential South Florida men who have graciously donated their time and resources to worthy causes and will work the runway on behalf of their participating nonprofits are:

Guests will be treated to gourmet selections from area restaurants and an open bar with Stoli Vodka and wines from Cooper’s Hawk Winery and Restaurants plus live entertainment.

HARRY BLU’S® - an award-winning original Miami handcrafted spirit will proudly join the fun. The highlight of the evening will be the fashion runway show that will feature the Men of Style honorees wearing the season’s top trending styles from Macy’s and Dillard’s.

Tickets go on sale October 12 and are $150 per person which includes complimentary valet parking. Online voting, $25 per vote, will be available, too.

Galleria Fort Lauderdale, recognized as one of South Florida's premier shopping destinations, features a variety of popular dining and retail options. Macy’s, Dillard’s and H&M anchor the center which also is home to Altar’d State, Apple, Banana Republic, Free People, Michael Kors and Pandora. The center features a fine roster of dining establishments such as Seasons 52, Cooper’s Hawk Winery and Restaurants, The Capital Grille and P.F. Chang’s. Powerhouse Gym and Blue Martini can also be found at the property. Just steps away from Fort Lauderdale’s world-famous beach, it is minutes from the airport, port, downtown, hotels and the Greater Fort Lauderdale Convention Center with easy access from Sunrise Boulevard, U.S. Highway 1 (Federal Highway), Interstate 95, Interstate 595, and U.S. Highway A1A (Fort Lauderdale Beach Boulevard). Located at 2414 East Sunrise Blvd., it is open from 11 a.m. to 8 p.m., Mon. through Sat. and 12 p.m. to 6 p.m. on Sun. Restaurants enjoy later hours. More information is available by calling (954) 564-1036 or by visiting www.galleriamall-fl.com.